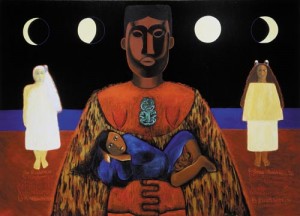 Hine-te-iwaiwa’s story can tell us much about how individuals and whānau respond to a difficult abusive relationship, and how to care for Ririki in these environments.

Hinaura was the sister or cousin of Maui who met and married the famous rangatira, Tinirau, who could speak to whales and befriend them. Hinaura and Tinirau had a son, Tu-huruhuru. They were very happy living in his kainga, village. Then one day Tinirau hit her. Hinaura took her son to her whānau kainga.

After many months of his pleading with her, Hinaura returned to his village. They were happy until one day Tinirau found another woman. Hinaura objected, so Tinirau imprisoned her behind a wall of magic whale rib bones. She was angered and called her brother/cousin Maui-mua. He changed himself in to a rupe, pigeon, and she rode on the bird’s back out of the prison.

Hinaura gathered her courage and decided to move on with her life. To mark the event, she changed her name to Hine-te-iwaiwa. She left Tu-huruhuru with Tinirau in order to pacify him, knowing that his whānau would continue to care for him. She became an expert in women’s affairs and responsibilities supporting ruahine and puhi, including the domestic arts. She protects and defends women in their work especially in childbirth. Even today her pao is used in birthing rituals to ease and ensure safety for the mama and the pepi. Weavers appeal to her to oversee their work.

This story has many lessons for us today: Wahine being brave and having the courage to reject abusers in their household; Whānau gathering around to support this wahine; Whānau males protecting their sisters/cousins from abusive husbands or partners; Whānau, friends and neighbours reporting any domestic abuse they see or hear.